Sri SahadebBasak has set an example as dedicated and innovative farmer. Born in 1960, Sri Basak is well educated and has graduated in Sociology with Honours in 1982 from University of Kalyani. He completed Master’s Degree in the same subject from the same university in 1985. Later on, he chose agriculture as profession and started devoting his time focusing on a better farming. He did a certificate course in Organic Farming from IGNOU, of BCKV study centre in 2011 and came in contact with Nadia KrishiVigyan Kendra.

In a total of 3.0 ha of land area, he practices Integrated Farming. He usually grows field crops like paddy, green gram, lentil and sesame etc. covering 1 ha area. He is cultivating some new age horticultural crops viz. strawberry, berry and dragon fruit along with mango, jackfruit and papaya in 1.2 ha land area. He maintains a small dairy unit with 4 cows, a good duckery unit raring about 200 numbers of Khaki Campbell ducks and a noticeable fishery area covering 1.6 ha land, raring major and minor carps like chital, vetki, prawn, koi etc. There is a mushroom unit also as a part of his farming venture.

As a progressive farmer he always tries to improve his skill and eager to know every aspects of farming from various sources, trainings, experts, departmental personnel etc. He eventually set a good example of improved cultivation/farming by incorporating those knowledge with his own innovation in front of other farmers. He adopted so many new technologies in farming. Sri Basak adopted organic farming system (including agriculture and horticulture crops, livestock, fisheries, duckery, mushroom cultivation, bio-gas plant, vermi-composting etc.) with traditional knowledge in the farm since 2000.

He was motivated by the scientists for cultivation of Aromatic rice and started Aromatic rice-based cropping system since April 2012 under RKVY Project on “Bengal Aromatic Rice” of Bidhan Chandra KrishiViswavidyalaya, Mohanpur, Nadia, West Bengal. As a result, he got the Organic Certification of Aromatic rice-based cropping system from the Certification Agency, IMO Control Pvt. Ltd., Banglore. As a progressive farmer, he always tries do to something more and by adopting advanced technologies he started commercial cultivation of temperate crops (viz. strawberry, brocolli, brushel sprouts etc.) in the field since 2010.

After the success of aromatic rice cultivation he started conserving and cultivating some indigenous rice cultivars (viz. Radhatilak, Gobindabhog, and Kalobhat etc.) and also supplied milled rice to the Department of Agril. Marketing, Govt. of West Bengal during 2012 and 2013.

A glimpse of his farming venture is given bellow:

His success influenced neighbouring farmers so much that many other farmers get interested and adopt new advanced technologies. Besides traditional crop cultivation, other farmers also take a chance to grow some newly introduced temperate crops. The cultivation of strawberry has been spread to neighbouring farmers’ fields of Santipur Block in Nadia district and Balagarh Block in Hooghly District. Sri Basak also supplied planting materials of strawberry to Jalpaiguri KVK, RKM Dayananda Ashram, Hooghly during 2011 and CADC Nadia during 2013. Sri Basak tried another new age crop, dragon fruit and his success influenced the farmers in Santipur Block of Nadia district so much that they started growing it from 2012.

His interest of cultivating indigenous Rice varieties has been spread into fellow farmers also. Some of them started the cultivation of Kalobhat (black rice) in Balagarh Block in Hooghly district.

As a true innovative farmer, Sri Basak made a new intervention in organic farming by using of Liquid organic manure, which later on practiced in the system of production and management and named as Amritaapani. It is a mixture of leguminous leaves (1 kg), cow dung (5 kg) and cow urine (1 liter) in 20 liters of water kept for 7 days and it is then sprayed mixing with water (1:10 ratio) directly to both agricultural and horticultural crops as organic nutrient in the farm.

As a farmer, he contributed a lot for the organic farming system by innovative ideas and practices. Amritaapani, the liquid organic manure is one of them.

Another is Conservation, recycling and using of farm waste in different manner, like

He also tried to mingle the traditional practice with modern technologies and succeeded in prevention of outbreak of disease and pests e.g.

His farming skill was recognized and he received a number of awards at different level. He got KrishakRatna award from Govt. of West Bengal during Mati-Utsav 2015. 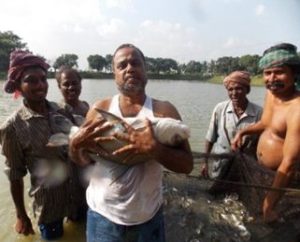