Floriculture: A lucrative business in hills

Sky is the limit for those who believe in themselves. True to this saying, a driver turned florist Mr.ArunChhetri from Bong Basti has shown that nothing is impossible to a willing and aspirant soul. A taxi driver by profession for about 12 years discovers that the future of his family would be in dark with a mere income of less than Rs. 2000/ month if he continues in the same field. As his fate would have taken a U- turn, this profession brought him many opportunities to visit various nurseries as he toured his passengers. Getting to know about the income generating capacity through cultivation of flowers, he started his first – nursery with few local flowers like gladiolus and marigold from 2006 as an extra source of income in a plot of five decimals. The profit incurred inspired him to produce more flowers in a larger scale. Meanwhile, through many practising farmers he came into contact with a SHG-JICA, which in turn introduced him to KVK and his first 3 days training on cultivation practices and plant protection on vegetables and flowers in the year 2012. Further, he was sent to Ludhiana in 2012 to attend a seminar on production and packaging of flowers and vegetables by DJKVK. After returning he took a loan of Rs. 1.7 lakh from a bank. Planting materials, sprayers with pesticides were provided by KVK with which he expanded his business by incorporating many varieties of flowers like Azalea, Gerbera, Anthurium, Zygo, Marigold, Chrysanthemum; hanging creepers and vegetables like Cabbage, Cauliflower, Broccoli, Tomato, Dalle etc. Again, in the year 2013, he was sent for exposure training to Kolkata by KVK to get a hands-on-training on cultivation management.

All operations regarding cultivation is carried out by his family members and one permanent labour with a temporary hiring of 20-25 labourers during the peak period for harvesting, packaging and marketing purposes. Through this profitable activity he was able to repay his loan on time and   also helped him to improve his standard of living.

Though his products are mainly sold in the local market of Kalimpong, he also exports them to various states like Sikkim, Bihar, and Jharkhand in India and in neighbouring countries like Nepal, Bhutan and Bangladesh. He now owns a land of 35 decimal which he utilizes for growing   flowers and vegetables. His annual profit ranges from 2 to 2.5 lakhs.

Sri Chettri has become a role model to the small and marginal farmers and rural youths of his locality. He has already organised two training courses on Gerbera cultivation for SHG of two villages namely Bong Busty and Deorali for a period of 20 days. Among them Ms.AnuChettri has already adopted his techniques on flower cultivation and many other farmers are   on their way to follow his footsteps. KVK Darjeeling felicitated Mr.Chettri on the occasion of KrishiMela, 2014, held at Relli Tar, Kalimpong where he was honoured by Sri BimalGurung, President, GorkhaJanamuktiMorcha. Mr.Chettri says that apart from expanding his own business he is interested in upliftment of many other poor farmers like him so that they can improve their socio-economic standard through self-employment and income generation. 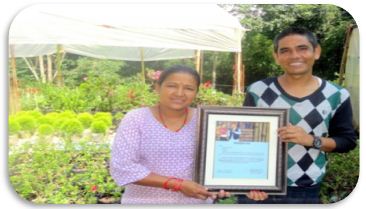